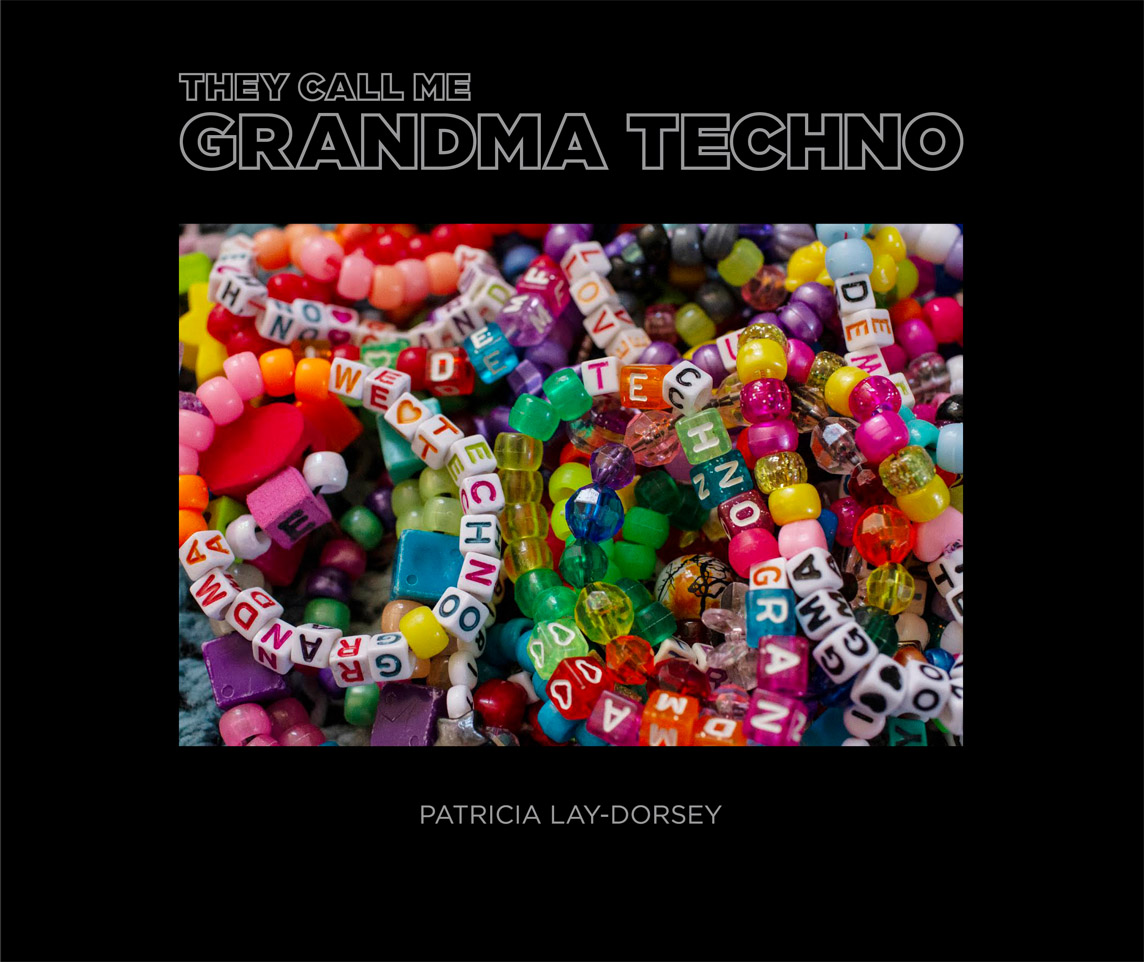 “They Call Me Grandma Techno” is a 157-page hardcover book that is available for sale at the Detroit Historical Museum (5401 Woodward Ave, Detroit, MI 48202).  Published by 1xRun in 2019, the book has sold out and is no longer available to buy online.

In 2019 the Detroit Techno Foundation, 1xRUN and Paxahau teamed up with Detroit photographer Patricia Lay-Dorsey, better known as Grandma Techno, to publish a commemorative book showcasing 150 of Grandma Techno’s photos that she captured at Movement Detroit 2007-2018. These photos show her view of the acclaimed annual electronic music festival produced by Paxahau and held in Detroit’s Hart Plaza every Memorial Day Weekend (the last Monday in May).

Jesse Cory of 1xRUN came up with the idea of publishing the book, coordinated the process and is overseeing distribution. Haley Suzanne Stone designed the cover, layout, merchandise and publicity material for the book. Paige Lustig served as book project manager, Jason Clark as Paxahau creative director, and Emily Swank as producer/director of the Grandma Techno mini-doc for Fanny Pack Films. Brian McCollum of the Detroit Free Press conducted the interview and wrote the text for the book, and Detroit photographer Bryan Mitchell allowed us to use his photos of Grandma Techno to illustrate Brian McCollum’s text. This book was printed by Bang Printing in Minneapolis, MN. Publishing funds were raised through the generous support of Kickstarter backers from around the world.

THEY CALL ME GRANDMA TECHNOFALLING INTO PLACE: SELF PORTRAITSMY CAREGIVERS AND IGRANDMA TECHNO CHECKS INCOVID COMPOSITESWE WILL NOT BE SILENTTHE HOLE IN BETWEEN: COLLAGES FROM THE RAUSCHENBERG RESIDENCYLOOKING FOR FAMILY IN DETROITMURALS IN THE MARKETJUST ANOTHER MARRIED COUPLEDETROIT'S YOUNG MUSICIANSDETROIT: HIDDEN IN PLAIN SIGHTTHE BLUE MIRROR PROJECTTHE SPACE BETWEENACTIVE ELDERSOCCUPY DETROIT PHOTO ALBUMTEA FOR TWODUALITIESWINTER NUDES PHOTOGRAPHER'S STATEMENTCONTACTBIO/RESUMETHEY CALL ME GRANDMA TECHNO, THE BOOKFALLING INTO PLACE, THE BOOKLINKS TO PUBLISHED WORKSVIDEOS AND SLIDESHOWSORDER PRINT-ON-DEMAND BOOKSCURRICULUM VITAE Guestbook
home
portfolios
THEY CALL ME GRANDMA TECHNO
FALLING INTO PLACE: SELF PORTRAITS
MY CAREGIVERS AND I
GRANDMA TECHNO CHECKS IN
COVID COMPOSITES
WE WILL NOT BE SILENT
THE HOLE IN BETWEEN: COLLAGES FROM THE RAUSCHENBERG RESIDENCY
LOOKING FOR FAMILY IN DETROIT
MURALS IN THE MARKET
JUST ANOTHER MARRIED COUPLE
DETROIT'S YOUNG MUSICIANS
DETROIT: HIDDEN IN PLAIN SIGHT
THE BLUE MIRROR PROJECT
THE SPACE BETWEEN
ACTIVE ELDERS
OCCUPY DETROIT PHOTO ALBUM
TEA FOR TWO
DUALITIES
WINTER NUDES
information
PHOTOGRAPHER'S STATEMENT
CONTACT
BIO/RESUME
THEY CALL ME GRANDMA TECHNO, THE BOOK
FALLING INTO PLACE, THE BOOK
LINKS TO PUBLISHED WORKS
VIDEOS AND SLIDESHOWS
ORDER PRINT-ON-DEMAND BOOKS
CURRICULUM VITAE
BLOG
guestbook
previous next